MRCVSonline cannot control these cookies from outside sources and we advise you to check with the relevant third party for more information..
Rare Sumatran tiger born at ZSL London Zoo 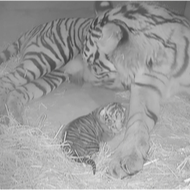 The newborn is currently tucked away inside its cubbing den with mum Gaysha.

The arrival is being hailed as a boost to the collaborative global breeding programme.

Keepers at ZSL London Zoo are celebrating the birth of a critically-endangered Sumatran tiger, one of the rarest and smallest subspecies of tigers in the world.

Born in the early hours of Sunday, 12 December to mum Gaysha (10) and dad Asim (10), the cub is part of an original litter of three, but sadly its siblings did not survive labour.

While the cub is yet to be named, incredible camera footage released by the Zoo shows the rare newborn being fed and cleaned by Gaysha in its cubbing den, as well as taking its first wobbly steps on the hay.

Keepers say the cub will remain in the cubbing den until vets can administer its first vaccinations, at which point they will also be able to determine its sex.

ZSL London Zoo tiger keeper Lucy Reed said: "The chunky little cub is doing really well in mum’s excellent care, and definitely takes after dad Asim in terms of size and strength. We’ve seen some key milestones already, with the little one taking its first steps almost immediately and - more recently - opening its eyes, which are always closed for the first few days after birth.

“At the moment, while we’re still keeping a close eye via cubcam, we’re also taking care not to disturb the family so that they can bond together - we can’t wait to get to know the little one as it grows bigger and begins to explore more of its surroundings.”

The new cub comes just a year after the arrival of Gaysha at the Zoo and is being hailed as a boost to the collaborative global breeding programme for Sumatran tigers. The latest figures show just 300 remain in the wild.

Native to the forests and jungles of Sumatra, Indonesia, the species is classified as critically endangered on the IUCN Red List of Threatened Animals. Poaching, habitat loss and human conflict have been blamed for their continuing decline.