MRCVSonline cannot control these cookies from outside sources and we advise you to check with the relevant third party for more information..
Conservationists hail arrival of Visayan warty piglet 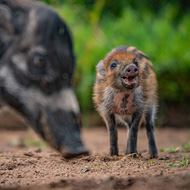 The new arrival explores the outside world with mum Gwen at Chester Zoo.

Rare species is on the brink of extinction from habitat loss and hunting.

Conservationists at one of the UK’s most visited zoos are celebrating the birth of a rare species of pig, of which just 200 remain in the wild.

Mark Brayshaw, curator of mammals at Chester Zoo, said the arrival of a Visayan warty piglet ‘will help champion the plight of this fascinating, charismatic species’.

Mr Brayshaw commented: “It’s fantastic to see the birth of any animal, but when they’re critically endangered and fighting for survival in the wild, it makes it even more special. Baby piglets are incredibly energetic and playful, and so the whole group will certainly be kept very busy over the coming months.”

Native to the Visayan islands in the central Phillipines,

Visayan warty pigs are listed as critically endangered by the International Union of Conservation for Nature (IUCN). The decline of the forest-dwelling species is blamed on habitat loss and hunting.

Currently, there is not much information available about these animals in the wild, and experts say that by working closely with them in the zoo, they can transfer their knowledge to support their wild cousins.

Stuart Young, a regional field programme manager for South-East Asian Islands at Chester Zoo, said the knowledge is shared with partners in the Philippines and has helped with the reintroduction of 19 Visayan warty pigs back into the wild.

He added: “The pigs were reintroduced to Bayawan Nature Reserve in Negros in July 2020, where the animals had been extinct for more than 10 years. We’re absolutely delighted to reveal that the population is now thriving, and 10 piglets have been born since they were rehomed.

“Although pigs can sometimes be overlooked, and don’t gather the attention that other bigger mammals receive, they play a really important role in the ecosystem - which is why we must continue to prevent their extinction.”