MRCVSonline cannot control these cookies from outside sources and we advise you to check with the relevant third party for more information..
US vets perform successful surgery behind rabbit's eye 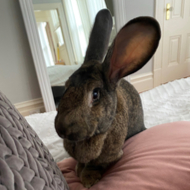 Lady Alaia McBiggs has recovered well from her operation.

The team carried out a technique called marsupialization.

US vets have successfully performed invasive surgery on an abscess growing behind the eye of a giant rabbit.

Exotics care specialists worked with the diagnostic imaging and anaesthesia team to perform a CT scan which revealed a large, growing abscess. Owing to the vulnerable location of the abscess, the eye was also evaluated by ophthalmology and neurology/neurosurgery specialists.

Thankfully, the specialists did not find any neurological abnormalities or damage but owing to the abscess’ location, the thick nature of the pus, and the likelihood of recurrence, there were limited options to save the eye.

The team devised a plan to remove part of the rabbit's cheekbone to access the growth and perform a technique called 'marsupialization' to open and drain the pus. This surgery removes part of the bone structure that surrounds and protects the eye to approach the abscess and enables it to heal over time from the inside out.

Alaia spent an additional five days in the hospital due to the extensive aftercare needed. On her return home, Alaia's owner continued with daily wound flushes and medication administration, including penicillin injections.

The rabbit's primary veterinary surgeon also helped with aftercare for about three months until Alaia was fully recovered. Through it all, Harris said she did whatever it took to nurse her rabbit back to health.

“I feel like it’s my responsibility to go to whatever lengths needed,” Harris said. “Thankfully, I can do this for her. I can’t imagine having to say no just because of a financial situation. No matter what, I would find a way to make it work.”

Lady Alaia McBiggs is reportedly back to her old self, enjoying time with her two rabbit housemates, Lord McSmalls and Hare E. Bun.