MRCVSonline cannot control these cookies from outside sources and we advise you to check with the relevant third party for more information..
Mother elephant seals recognise own pup's voice 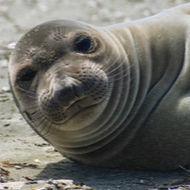 New research shows seals can recognise their own offspring's voice at only two days old.

A new study has shown that mother elephant seals can recognise their own offspring's voice from as early as two days after birth.

As reported by BBC News, the research, published in Biology Letters, found that mother elephant seals were more attentive to the noises of their own child, an ability which helps the seal pups to survive during the first precarious month of life.

Led by Dr Juliette Linossier, the study saw researchers sneak microphones into the seal colony to record the offspring's noises without disturbing them. They then played the recordings of the seal pups to the mothers, to discover whether each could pick out their own child's voice.

Dr Casey, one of the researchers on the study, told BBC News: "It was dramatic - we see the recognition after just a day or two.”

The seals' ability to pick out their own pup's voice has left the researchers with questions about the behaviour of the female seals in this colony, who often feed each other's pups.

“Females fast for the entire month they are nursing,” said Dr Casey. "It makes no sense for them to use their resources on another mother's pup. But at this site that we study, there have been a lot of observations of females feeding pups not related to them."

Dr Casey suggested a potential reason for this, that the genetic similarity of elephant seals caused by hunting in the late 1800s may cause this behaviour:

"So we think all of the individuals alive today - around 300,000 animals - are related to about 20 animals that survived.”

The willingness to feed one another's pups could possibly stem from the genetic link, and Dr Casey added: "That's something we would like to investigate.”