MRCVSonline cannot control these cookies from outside sources and we advise you to check with the relevant third party for more information..
Polar bear cub born at Highland Wildlife Park 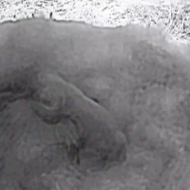 Pictured: A still image taken from CCTV footage of the cub asleep on it's mother.

A polar bear cub has been born at Highland Wildlife Park, the Royal Zoological Society of Scotland (RZSS) has announced.

Vickie Larkin, carnivore team leader at Highland Wildlife Park, commented on the new arrival: “This is a tremendous occasion which is a testament to our team’s hard-work.

“While we are excited about the new arrival, we are not celebrating quite yet as the first few weeks of a polar bear’s life is critical, with potential immune system complications and mum’s need for privacy during this time our top priority.”

The cub's parents, Arktos and Victoria, previously had a cub in 2017 called Hamish, who was the UK's first polar bear cub in 25 years.

“We were hopeful Victoria and Arktos would produce another cub when they were reintroduced for the breeding season in February,” Vickie continued.

“She is a very attentive mother and we’re pleased to say they are both doing well so far. We will not know if the little one is a boy or girl until we are able to perform health checks in the spring and they will be named shortly after.

“Polar bears are born blind and do not open their eyes until they are a month old. At the moment, the youngster is about a foot long and weighs roughly the same as a guinea pig.”