MRCVSonline cannot control these cookies from outside sources and we advise you to check with the relevant third party for more information..
Novel DogPhone could empower 'pandemic pups' 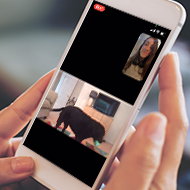 The accelerometer starts a video call with the owner when the dog shakes the ball.

Researchers at the University of Glasgow have developed a prototype ‘DogPhone’ that could empower anxious pups to stay in touch with their owners.

The novel device, which allows dogs to call their owners, is described in a new research paper being delivered today (17 November) at the 2021 ACM Interactive Surfaces and Spaces Conference in Poland.

It consists of an internet-connected accelerometer that detects movement, which is placed inside a ball. When the dog shakes the ball, the accelerometer starts a video call with the owner on their laptop or mobile device.

The owner can also use the system to call their dog, and their pet is free to answer or ignore the call.

Animal-computer interaction specialist Dr Ilyena Hirskyj-Douglas, who developed the prototype, said: “There are hundreds of internet-connected ‘smart toys’ on the market that dog owners can buy for their pets, from fitness monitors to remotely-controlled treat dispensers. Smart toys for pets are expected to be a 20 billion dollar industry by 2025.

“However, the vast majority of them are built with the needs of dog owners in mind, allowing them to observe or interact with their pets while away from home. Very few of them seem to consider what dogs themselves might want, or how technology might benefit them as living beings with thoughts and feelings of their own.”

Dr Hirskyj-Douglas worked closely with her 10-year-old labrador, Zack, and colleagues at Aalto University in Finland to develop the prototype.

To make a device that Jack would find appealing, she first studied the types of objects and toys that Zack likes to play with and the textures he enjoys, settling on a soft ball.

Dr Hirskyj-Douglas and her team then built an internet-connected accelerometer that could be hidden inside the ball. Zack was taught how to use the ball to start a video call and was left with the toy to play with for 16 days.

Initial testing revealed that the ball was too sensitive, with Zack making a total of 18 calls, half of which were accidental. In some of the calls, Zack showed his owner some toys they often play with together and approached the screen, suggesting he wanted interaction.

The team made several refinements to the accelerometer to phase out the accidental calls and allow deliberate ones to happen more easily. As testing went on, many of the calls were still accidental, but the researchers did note more interaction between Zack and his owner.

Dr Hirskyj-Douglas used her phone to show Jack her environment, including her office, a restaurant and a street busker. Again, Zack showed additional interest in these interactions, pricking up his ears and approaching the screen.

“Of course, we can’t know for sure that Zack was aware of the causal link between picking up the ball and making a call, or even that some the interactions which seemed accidental were actually unintended on his part,” explained Dr Hirsky-Douglas. “However, it’s clear that on some occasions, he was definitely interested in what he was seeing and that he displayed some of the same behaviours he shows when we are physically together.”

Researchers believe the device could help so-called ‘pandemic puppies’ taken on during the COVID-19 lockdowns and help them find new ways to deal with separation anxiety as their owners return to work.