MRCVSonline cannot control these cookies from outside sources and we advise you to check with the relevant third party for more information..
Baby sloth born at ZSL London Zoo 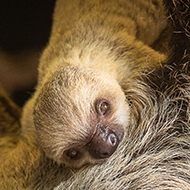 The youngster surprised keepers with a quick birth.

A baby two-toed sloth was born at ZSL London Zoo on Sunday 24 October, surprising keepers with a speedy morning birth.

Marilyn, the pregnant sloth, was due to give birth soon, and zookeepers arrived early in the morning to check on her, finding her snuggled up in her den, still pregnant.

The keepers left to make breakfast for the animals, but on returning to Marilyn's enclosure, they found Marilyn with her baby, having given birth in the short time the keepers had left her, an uncharacteristic speed for two-toed sloths.

Marcel McKinley, London Zoo's sloth keeper, said: “We knew Marilyn was coming to the end of her pregnancy, so we’ve been keeping a close eye on her, arranging regular ultrasounds with the Zoo’s vet team and checking every day for signs of the new arrival.

“We looked in on her first thing and there was no baby - and no sign at all that she was labour.

“Less than an hour later I spotted something that looked like a tiny arm, tucked into Marilyn’s tummy; I called the rest of the team to confirm my eyes weren’t playing tricks on me, and they arrived just in time to see her turn around in the tree and give us the perfect view of her healthy newborn - who she’d quietly delivered, with no fuss at all, while we’d been chopping up sweet potato for her breakfast. She clearly took the whole thing in her stride.”

The baby sloth has been named Terry, and is reportedly doing very well. Marcel added: “We’ve named the youngster Terry, after one of the Zoo’s longest-serving zookeepers - our colleague Terry March, who has devoted his whole life to caring for threatened species and educating the public about wildlife.”