MRCVSonline cannot control these cookies from outside sources and we advise you to check with the relevant third party for more information..
Avian flu confirmed in Scotland 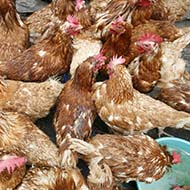 Following this confirmation, an Avian Influenza Prevention Zone (AIPZ) has been declared across the UK.

Restrictions have been placed around the property to limit further spread of the disease.

Avian influenza H5N1 has been identified in a flock of kept birds in Scotland's Angus constituency, the Scottish government has confirmed.

This announcement comes after birds in Worcestershire and Wales were confirmed to have the disease, and since this outbreak was announced, an Avian Influenza Prevention Zone (AIPZ) has been declared across the UK.

Restrictions have been imposed on the premises, with three and 10 kilometre Temporary Control Zones set up around premises, and the remaining birds at the property will be humanely culled.

Within the Temporary Control Zones, a range of measures have been put in place, including restrictions on the movement of poultry, carcasses, eggs, used poultry litter and manure.

Rural affairs secretary Mairi Gougeon said: “With the recent disease confirmations in wild and captive birds in the UK, it is not unexpected for avian influenza to be found in birds here.

“Temporary Control Zones have been put in place around the infected premises and we ask that the public remain vigilant and report any findings of dead wild birds.”

Scotland's chief veterinary officer Sheila Voas said: “We are conducting further tests to establish the pathogenicity of avian influenza H5N1 in a flock of birds in the Angus constituency.

“We have already made clear that all bird keepers – whether major businesses or small keepers with just a few birds – must ensure that their biosecurity is up to scratch to protect their birds from disease.

“Keepers who are concerned about the health or welfare of their flock should seek veterinary advice immediately. Private vets, or the local Animal and Plant Health Agency office, will also be able to provide practical advice on keeping birds safe from infection.

“If a single dead wild waterfowl (swans, geese or ducks), a single dead bird of prey, or five or more dead wild birds of any other species (including gulls) are found at the same place at the same time, this should be reported to Defra’s national helpline. Do not touch or pick up any dead or visibly sick birds.”