MRCVSonline cannot control these cookies from outside sources and we advise you to check with the relevant third party for more information..
Bark beetle pest identified in Kent and East Sussex 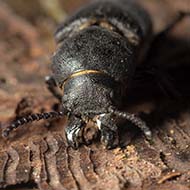 The eight-toothed European spruce bark beetle is considered a serious pest on spruce in England.

The Forestry Commission is acting on the discovery.

New breeding populations of the eight-toothed spruce bark beetle (Ips typographus) have been identified in Kent and East Sussex.

Defra is warning woodland managers, land owners, those in the forest industry and those working in tree nurseries to remain vigilant after several new populations of the beetle were discovered.

Two breeding populations were initially confirmed in two woodlands in Kent on 25 June and 1 July by the UK chief plant health officer, and 13 further outbreaks have been discovered in Kent and East Sussex following extensive surveillance.

Nicola Spence, the UK chief plant health officer, commented: “Several outbreaks of the eight-toothed spruce bark beetle in areas of woodland in Kent and East Sussex have been confirmed.

“This beetle poses no threat to human health, but can have a serious impact on spruce trees species and the forestry industry.

“We are taking swift and robust action to limit the spread of the outbreaks as part of our well-established biosecurity protocol used for tree pests and diseases, and legislation is in place that restricts the movement of spruce trees in the area.

“I encourage anyone who suspects a sighting of the bark beetle to report these to the Forestry Commission through the Tree Alert Portal.”

The Forestry Commission is overseeing the necessary eradication measures, and a demarcated area remains in place to restrict movement of conifer material capable of spreading the pest animal. The boundary of this demarcated area has been extended following the recent findings.