MRCVSonline cannot control these cookies from outside sources and we advise you to check with the relevant third party for more information..
Giant pandas' markings act as camouflage, study finds 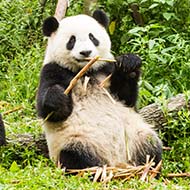 Researchers use imaging models to show how unique colourings work together to hide the pandas.

Giant pandas’ distinctive black and white markings help them to blend in with their environment, according to new research.

The study, published in Scientific Reports, used state-of-the-art imaging techniques to show that the unique colourings work together to hide the giant panda.

Researchers analysed rare photographs of giant pandas, taken in their natural environment and found that the black markings blended in with dark shades and tree trunks while the white patches matched foliage and snow.

The findings were the same whether viewed by human, felid or canine vision models.

“I knew we were on to something when our Chinese colleagues sent us photographs from the wild, and I couldn’t see the giant panda in the picture,” commented study author Prof Tim Caro, from the University of Bristol’s School of Biological Sciences.

“If I couldn’t see it with my good primate eyes, that meant that would-be carnivorous predators with their poorer eyesight might not be able to see it either. It was simply a matter of demonstrating this objectively.”

As part of the study, the team also analysed disruptive colouration – a second form of camouflage in which visible boundaries on the surface of an animal break up its outline (e.g. the border between the large black and white areas of fur). They found that giant pandas show this form of defensive colouration, especially at longer viewing distances.

Lead author Dr Ossi Nokelainen added: “The rare photographic evidence allowed us to examine the giant panda appearance in its natural environment for the first time. With help of the state-of-the-art image analysis, we were able to treat these images as if the pandas would have been seen by their predator surrogates using applied vision modelling techniques and also to explore their disruptive colouration.

"Comparative results totally bust the myth of giant pandas being overtly conspicuous in their natural habitat.”