MRCVSonline cannot control these cookies from outside sources and we advise you to check with the relevant third party for more information..
Birds learn to avoid plants harbouring toxic insects 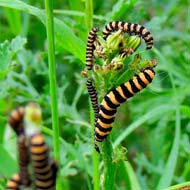 Researchers show that birds learn that ragwort flowers are a cue for danger.

Birds can identify which plants play host to toxic insects, according to new research.

Building on previous studies that show young birds learn the colours of dangerous insects, this new study reveals birds also learn the appearance of the plants such insects live on.

The study was led by the University of Bristol and published in the journal, Current Biology.

In the study, scientists exposed artificial cinnabar caterpillars, distinguishable by bright yellow and black stripes, and non-signalling fake caterpillar targets to wild birds by presenting them on ragwort and bramble, a non-toxic plant.

They found that both types of caterpillar survived better on ragwort compared to bramble when exposed to the birds.

Next, the team was keen to find out whether birds use the bright yellow flowers of ragwort as a cue for avoidance. To test this, they removed spikes of flowers from the ragwort and attached them to the bramble.

In this experiment, only non-signalling caterpillars survived better on plants with ragwort flowers, compared to the same plant type without the flowers. The survival of the cinnabar-like target was equal across all plant treatments.

Lead author Callum McLellan, a graduate student at the School of Biological Sciences, said: “Cinnabar caterpillars have this really recognisable, stripey yellow and black appearance. They also only live and feed on ragwort, which itself has distinctive yellow flowers.

“We have shown that birds learn that the ragwort flowers are a cue for danger, so can avoid going anywhere near toxic prey. It’s more efficient to avoid the whole plant than make decisions about individual caterpillars.”