MRCVSonline cannot control these cookies from outside sources and we advise you to check with the relevant third party for more information..
Burgess Excel Vet Awards deadline extended 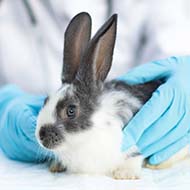 Nominations are particularly encouraged in the Rabbit Support Staff of the Year and Rabbit Awareness Week Campaign of the Year' categories.

Nominations can be made until Friday 8 October.

Burgess Pet Care has announced that the deadline for this year's Burgess Excel Vet Awards has been extended until this Friday (8 October).

Originally intended to close on Friday 1 October, the deadline has been extended to allow for a greater number of submissions, with a particular desire for more submissions in the 'Rabbit Support Staff of the Year' and 'Rabbit Awareness Week Campaign of the Year' categories.

There are eight awards eligible for nominations:

The winners of each award will be announced on 11 November at the London Vet Show 2021, and the winner from each category will receive a trophy and a cash prize of £250.