MRCVSonline cannot control these cookies from outside sources and we advise you to check with the relevant third party for more information..
RSPCA asks councils to declare that pets aren't prizes 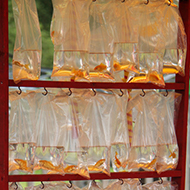 The RSPCA is urging supporters to write to their local Councillors in support of a ban.
The new campaign hopes to prevent the giving of fish as fairground prizes.


The RSPCA is urging councils to ban the giving out of live animals as fairground prizes, as it fears the 'outdated and cruel' practice will return as events resume post-restrictions.

Urging councils to take a lead on the issue, the RSPCA has asked them to ban any events on their land which give away pets as prizes.

Evangeline Button, from the wildlife department of the RSPCA, said: "Fairgrounds are a summer family favourite - and we know many people will be delighted to see them return as coronavirus restrictions continue to be eased.

"But sadly, it’s still too often commonplace to see pets - mainly goldfish - being given away as prizes. This remains legal in both England and Wales - but for the animals involved, there is no fun at the fair.

"Animal ownership is a big responsibility - and shouldn't be a spur of the moment result of winning a game. To those playing - if you win, they lose.”
Supporters are being urged by the charity to write to their local Councillor, and ask them to propose a Notice of Motion to ban events on local authority land where pets were being given away as prizes.

The RSPCA hopes that this will make a powerful statement to the UK and Welsh Governments that the giving away of pets as prizes should be a banned practice. The charity continues to ask prospective fish owners to do their research before adding a pet to their family, and say that fish are often 'misunderstood', and can be challenging animals to care for.

“Goldfish are easily stressed and very often, fish that are won as prizes suffer miserably from shock, oxygen starvation or die from changes in water temperature, and many will die before their new owners can even get them home,” Evangeline Button added, “They're misunderstood pets - as they can make great companions; but can actually be challenging to look after and new owners must do their research before they acquire the fish, not afterwards.

“When bringing a fish home for the first time, it’s important to set the tank up at least two weeks in advance to make sure it’s all running smoothly, and this just isn’t possible for someone who’s won a fish without being prepared for it.

“Sadly, goldfish won at fairgrounds are held in plastic bags in unsuitable conditions for long durations and taken to homes which are not adequately prepared to meet their welfare needs. It should be candy floss people take home from the fair - not live animals.”

Caerphilly County Borough Council is one of a number of local authorities who have already taken action to ban the practice in 2019, following concerns about fish being given away as prizes at a fair in the town.

Cllr James Prichard, who spearheaded the ban in Caerphilly, commented: “People I spoke to in Caerphilly were aghast the practice of giving pets as prizes isn't already banned - so it was really important for me to work with the RSPCA to deliver this change. Here in Caerphilly, I'm proud we have now taken a firm stand and used the power at our disposal, and also urged the Welsh Government to deliver change in this area across Wales.”