MRCVSonline cannot control these cookies from outside sources and we advise you to check with the relevant third party for more information..
European Commission responds to caged-farming ECI 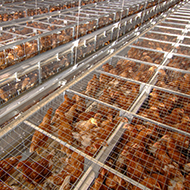 "Our commitment is clear: the phasing out of cages for farm animals will be part of our actions." - Stella Kyriakides, health and food safety commissioner.

The Commission has responded positively to the “End the Cage Age” initiative.

On Wednesday 30 June, the European Commission decided to positively respond to “End the Cage Age” - the European Citizens' Initiative (ECI), which demands a transition to more ethical and sustainable farming systems.

The ECI is supported by over one million EU citizens, and seeks to ban cages entirely for farmed animals across Europe, with over 170 organisations joining forces to spearhead the Initiative.

In its response, the Commission has set out plans for a legislative proposal coming into effect in 2023 to ban the use of cages for a number of farm animals. The proposal comes as a part of the ongoing revision of the animal welfare legislation under the Farm to Fork Strategy.

College member Věra Jourová, vice-president for values and transparency, said: “As the successful outcome of this Initiative shows, citizens' input can make a real difference, leading to concrete legislative proposals from the Commission. We have heard the concerns of millions of people over the living conditions of farm animals and we will respond to it. My message to EU citizens is simple: the ECI is there for you, don't hesitate to use it!”

At current, only laying hens, broilers, sows and calves are covered by the EU's rules on caging. In the Commission's response, it promises that it has committed to a legislative proposal to phase out, and ultimately ban, the use of cage systems in farming for all animals mentioned in the Initiative.

Animals that the Commission's proposal will particularly be concerned with are those already covered with legislation, and other animals mentioned in the ECI – rabbits, pullets, layer breeders, broiler breeders, quail, ducks, and geese. For these specific animals, the Commission has already requested that the European Food Safety Authority (EFSA) complement the existing scientific evidence to determine the conditions required for the prohibition of cages.

Alongside the legislation, the Commission will seek specific supporting measures in key related policy areas, such as trade and research, and innovation in order to make the transition to cage-free farming economically viable. The Commission will be particularly concerned with helping farmers upgrade to more animal-friendly facilities in line with the new standards, using its new Common Agricultural Policy to provide financial support and incentives.

As the prohibition of cages will require changes to current systems of farming, the Commission will consider the socio-economic and environmental implications of the legislative measures, and will carry out an impact assessment which will be completed by the end of 2022. In the context of this assessment, a public consultation will then be carried out, and the Commission will assess the feasibility of working towards the proposed legislation entering into force from 2027.

Stella Kyriakides, commissioner for health and food safety, commented: “Animals are sentient beings and we have a moral, societal responsibility to ensure that on-farm conditions for animals reflect this. Today's response is a key step towards an ambitious revision of the animal welfare legislation in 2023, a priority since the beginning of my mandate.

“Our commitment is clear: the phasing out of cages for farm animals will be part of our actions under the Farm to Fork Strategy and lead to more sustainable farming and food systems. I am determined to ensure that the EU remains at the forefront of animal welfare on the global stage and that we deliver on societal expectations.”

Commissioner for agriculture, Janusz Wojciechowski, said: “The Green Deal and its Farm to Fork Strategy, supported by the new Common Agricultural Policy, will be crucial in the transition to sustainable food systems. This citizens' initiative only confirms that this transition also responds to a societal demand for more ethical and sustainable farming.”