MRCVSonline cannot control these cookies from outside sources and we advise you to check with the relevant third party for more information..
Leopard gecko skin tumours linked to human melanoma gene 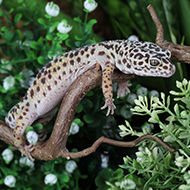 The gene has already been linked to cancer in both humans and other animals.

UCLA scientists have discovered a link between lemon frost geckos and a gene linked to human melanoma.

Scientists at the University of California have traced an unusual colouring and a tendency to form tumours in a rare leopard gecko to a gene linked to human melanoma.

A reptile shop in California began breeding lemon frost geckos in 2016, and produced several of the distinctly yellow-coloured lizards.

Lemon frost geckos are rare, and can fetch prices of over $2,000. However, there is a problem with this breed – roughly 80 per cent of lemon geckos develop bulbous white skin tumours within the first five years of their life. In some individuals, these tumours have the potential to grow exceedingly large, uncomfortable and dangerous for the geckos.

Kruglyak and Guo, geneticists at UCLA, suspected a genetic root to these tumours, considering that it could potentially be a single mutation in a single gene. Using a variety of genetic analyses, they traced the tumours and colouring in this species to a gene implicated in skin cutaneous melanoma, which is a deadly cancer in humans. Their findings are reported in the journal, PLOS Genetics.

The leopard geckos' colouring comes from cells called iridophores. Unlike human skin cells, which get their colour from the melanin pigment, iridophores produce colours via crystals.

Guo collected DNA from 500 lizards, and read the genetic letters of the animals genomes. The team hunted for DNA regions that could link to certain colour varieties, specifically, the genetic signposts that occurred only in lemon frost animals.

Researchers mapped the lemon frost trait to a region that contained a single gene, SPINT1, which has already been linked to cancer in humans and other animals. Scientists have also implicated the gene in human skin cutaneous melanoma.

Given this uncommon discovery, it is possible that the leopard gecko could serve as a model for scientists researching melanoma, and in the future, Guo wishes to explore the genetic basis of even more lizard colours, including the blizzard and patternless varieties.