MRCVSonline cannot control these cookies from outside sources and we advise you to check with the relevant third party for more information..
Welsh government to back primate pet ban 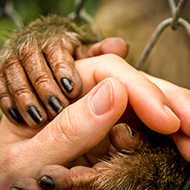 72 per cent of Welsh people support a ban on keeping primates as pets.

RSPCA Cymru is celebrating a 'big win' for its long-running campaign to stop primates from being kept as pets. The turning point comes as the Welsh government shifts its position on the topic to back a primate pet ban.

A Legislative Consent Motion (LCM) was published by the Welsh government on Tuesday (22 June) regarding the UK Government's Animal Welfare (Kept Animals) Bill. The motion promotes a joined-up approach on several animal welfare policies between the two countries.

The legislation the UK Government has released intends to make a number of reforms surrounding the welfare of kept animals. Among these include legislation on keeping primates as pets, livestock worrying, the export of live animals, and pet importation.

Under the LCM – which will require the support of Senedd members - the UK Government will be given consent to legislate on animal welfare matters which are usually the exclusive concern of the Welsh government.

Despite this consent to legislate, the plans that the UK Government have created to prevent the keeping of primates as pets, do not apply to Wales - with the Welsh Government suggesting in January that it did not intend to ban this practice.

In accordance with the plans of the UK Government, primates may not be kept in England unless they have been specifically authorised under licence. In addition to this, owners will have to meet certain standards imposed by the Secretary of State in regulations.

This is strongly supported by the RSPCA, however, the RSPCA has a few concerns that the legislation relies too heavily on a licensing scheme administered by already overburdened local authorities, and supports a tightening of the scheme during its Parliamentary journey.

As long as Welsh Ministers for Wales were given the same powers as the Secretary of State in England, the Welsh government has suggested that it would be 'content' for the provisions prohibiting the keeping of primates as pets to be extended to Wales. This move could potentially pave the way for the UK bill to be amended, including Wales in the restrictions.

A ban has long been campaigned for by RSPCA Cymru, as it believes that it is essentially impossible to meet the needs of monkeys and other primates in a domestic environment. Despite this impossibility, there are an estimated 120 primates currently being kept as pets in Wales.

David Bowles, head of RSPCA public affairs commented on the Welsh government's potential turnaround, saying: "As recently as January, the Welsh Government was publicly not minded to ban - but, following valuable discussions and our ongoing campaigning, we're over the moon to hear them support these important provisions in the Kept Animals Bill extending to Wales.

"We know the public supports a ban - and this is a big win for them and our campaign. We’re delighted that the laying of this LCM has put us a big step closer to ending the keeping of primates as pets in wholly inappropriate environments here in Wales."