MRCVSonline cannot control these cookies from outside sources and we advise you to check with the relevant third party for more information..
Cats Protection rescues a cat and her kittens found nesting in a tree 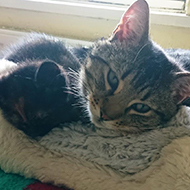 The mother and her kittens, as well as the tom cat, were all named after birds in tribute to their unusual rescue.

Feline family were being watched over by a friendly tom cat.

Cats Protection volunteers received quite a surprise recently when they found a nursing cat and its kittens nesting high up in a tree at the back of an industrial estate.

The team was investigating reports of a welfare issue with a colony of cats on an industrial site in Amersham when a local resident approached them to let them know that she had been feeding a cat from the colony who had very recently given birth and thought it was in need of help.

“We spent a week searching gardens, leafletting a huge area and asking residents to keep an eye out for where mum had hidden the kittens,” said welfare team member Ruth Goller. “We even set camera traps, but to no avail.

“Then one morning the mum showed up with a male who seemed bonded with her. I watched her eat and it was obvious that she recently had kittens and was still feeding, but we had no idea where she had stowed them.”

After following the cats to the back of the site, Ms Goller spotted the mother and three kittens high up in a tree in an old bird's nest.

Setting up humane containment traps, the team eventually managed to secure the mother and then carefully move the kittens from the tree into a carrier. After being checked over, the mother and kittens were transferred to Cats Protection fosterer Sue Buck.

Ms Goller also confirmed that the tom was in need of veterinary attention and brought him in as well. The Cats Protection veterinary team found he had an abscess on his foot and kept him in for a few days.

The abscess has healed well and, after being neutered, the male – now named Willet – has been reunited with the mother Oriole and her kittens Bran, Jay and Lori.