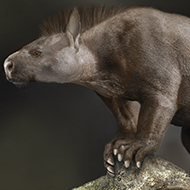 Reconstruction of a Paleocene periptychid condylarth, an ungulate-like mammal that lived around 65 million years ago.

The evolution of foot and ankle bones helped mammals to adapt and thrive following the extinction of dinosaurs, according to new research.

The study by the University of Edinburgh suggests that a spike in evolution after dinosaurs became extinct allowed mammals to diversify and prosper during a time of intense global change.

Palaeontologists studied bones that form part of the ankle and the heel and found that mammals during this time, known as the Paleocene Period, were less primitive than earlier believed. Their findings are published in the journal, Proceedings of the Royal Society B.

“At the core of our study, we wanted to figure out what Paleocene mammals were doing in terms of their anatomy and how this related to aspects of their lifestyle and evolution in the wake of the dinosaur extinction,” explained Dr Sarah Shelley, from the University of Edinburgh’s School of GeoSciences.”

In the study, researchers compared the anatomy of Paleocene mammals with species from the earlier Cretaceous period and those that exist today.

They analysed the foot and ankle bone measurements of 40 Paleocene species to reveal a snapshot into the animals’ lifestyle and body size. They then compared the results with data from living mammal species and mammals that existed during the Cretaceous Period.

Their study reveals that Paleocene mammals were stockier and more muscular than those from the Cretaceous Period or today. The Paleocene mammals' joints were also very mobile, with support from the ligament and tendons instead of the bony features in some living mammals.

The team believes that this mobility enabled the mammals to adapt and thrive much quicker following the dinosaur extinction. Many species’ ankles and feet were remarkably similar to living ground-dwelling and burrowing mammals, suggesting that these lifestyles were crucial to their survival.

Mammals that could burrow underground, for example, were more likely to survive the initial devastation of the asteroid hitting. The loss of tree habitat after the extinction may have advantaged ground-dwelling species..

“Paleocene mammals have this tendency to combine unusual mish-mashes of anatomy but are often seen as ‘archaic’ and unspecialised precursors to living mammal groups. What we found was this incredible diversity – they’re adapting and evolving their robustly built bodies in ways that are different to living mammals," said Dr Shelley.

“Our results show one of the many ways mammals were able to adapt and thrive following the catastrophic devastation of the end-Cretaceous extinction.”