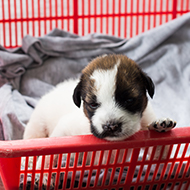 The Scottish SPCA is appealing for support as a surge in unwanted and seized animals across the past year has led to immense pressure being placed on its services and many of its centres reaching capacity.

The recent rise in demand for puppies has led to an increase in the number of raids and seizures of animals from low-welfare puppy farms and dealers and the charity has also seen a spike in calls to its helpline regarding unwanted pets.

In 2020, the Scottish SPCA received more than 136,000 calls to its animal helpline and frontline teams attended an average of 214 incidents each day – totalling some 78,000 over the year. More than 7,000 wild animals were admitted to its National Wildlife Rescue Centre.

The charity continued to help animals throughout the pandemic, rehoming 3,369 animals and caring for more than 1,300 animals seeking temporary refuge.

Many of the animals being cared for by the Scottish SPCA are puppies rescued from puppy farms and low-welfare breeders. Disease is rife among these animals due to the terrible conditions many of they are kept in, and many puppies are having to be euthanised.

Chief superintendent Mike Flynn said: “Unfortunately the pandemic has seen a rise in the number of puppies being sold. The pups are bred for financial gain with no thought given to the welfare of the puppies or their mums.

“We are dedicated to disrupting the multi-million-pound low-welfare puppy trade. Our undercover special investigations unit rescued over 150 puppies from dealers and ferry ports in 2020.”

He concluded: “Our centres have hit capacity and we desperately need the support of the animal loving Scottish public so that they don’t let animals suffer.”

To find out more about the Scottish SPCA's #DontLetAnimalsSuffer campaign, click here.