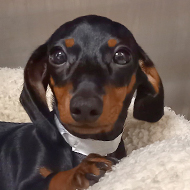 Miniature dachshund Margot arrived at the hospital with depression, lethargy and nausea.

A puppy has been treated successfully for vitamin D poisoning after eating a human medicine containing a synthetic form of the supplement.

Miniature dachshund Margot was presented to Davies Veterinary Specialists after gobbling up a tube of Dovonex ointment - a topical cream used to treat psoriasis in humans that contains calcipotriol, a synthetic derivative of vitamin D.

“We calculated that four-month-old Margot had ingested between 500-1000µg (161µg/kg – 323µg/kg) of calcipotriol,” explained Katherine Clarke, an internal medicine resident at Davies. “Toxicity studies in dogs suggest that 1.8 to 3.6µg /kg /day of calcipotriol can cause disturbances in calcium homeostasis, so it wasn’t surprising that Margot developed evidence of toxicity.”

Margot arrived at the veterinary hospital with depression, lethargy and nausea. She was also severely hypercalcaemic and mildly azotaemic.

The team initially managed her vitamin D poisoning with prednisolone, furosemide and intravenous fluid therapy. While she did show some clinical improvement, the hypercalcaemia persisted, prompting the addition of pamidronate to her treatment.

The combination of the treatments resulted in normocalcaemia and resolution of the azotaemia. The furosemide was then stopped, and the intravenous fluid therapy was gradually reduced over a few days; her calcium remained normal.

Margot was discharged on tapering doses of prednisolone and blood tests were performed before each dose reduction to ensure she remained normocalcaemic. She is now said to be be clinically very well having been off all treatment for a few months, and there are no signs that the vitamin D poisoning has led to any permanent damage.

“Vitamin D toxicity is relatively rare, although the growing trend in vitamin D supplementation in the human population means that dogs are more likely to have access to this vitamin,” said Katherine.

“The prognosis for vitamin D toxicity is variable with some cases experiencing an acute kidney injury or severe gastrointestinal bleeding due to calcification of the soft tissues. However, with prompt, aggressive treatment the prognosis can be reasonable.”