Cookie use on MRCVSonline
We use cookies to ensure that we give you the best experience on our website. If you continue without changing your settings, we will assume that you are happy to receive all cookies.
Accept Policy
Change cookie settings
Amphibians that produce fewer offspring 'face greater extinction risk' 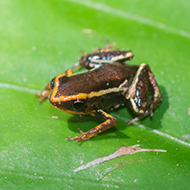 The study found that extinction risk increases in smaller amphibians that produce fewer young, such as rain frogs.

Amphibians are the most endangered animals in the world. Currently, more than 40 per cent of amphibians, including frogs, toads, salamanders and newts, face being wiped out altogether.

It is a long-held belief that larger body size increases extinction risk – a theory derived from research on mammals. In this new study, researchers investigated, for the first time, whether it is not body size, but instead, the number of babies a female produces per clutch that determines extinction risk.

The team looked at amphibians from across the globe, including frogs, salamanders and caecilians, and matched the endangerment levels of thousands of species. They then analysed this information against their body sizes and the number of babies they produce per clutch.

It is hoped the findings will guide future conservation action about which species and areas to protect - resetting the theory to focus on reproduction levels of animals rather than on body size when calculating extinction risk.