Cookie use on MRCVSonline
We use cookies to ensure that we give you the best experience on our website. If you continue without changing your settings, we will assume that you are happy to receive all cookies.
Accept Policy
Change cookie settings
Study finds lasers prevent the spread of avian influenza virus 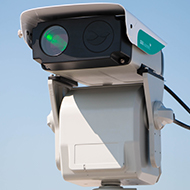 The system works by projecting a green laser across areas where wild birds aggregate. The birds see the laser as a physical threat and flee the area.

Research from Wageningen University in the Netherlands has shown that lasers are an effective method of deterring migrating waterfowl from appearing on poultry farms.

Wageningen Bioveterinary Research (WBVR), part of Wageningen University, had previously discovered a group of mallards that were frequenting a free-range poultry farm from November to February, increasing the exposure to avian influenza for chickens on the farm.

Armin Elbers, project leader of the study and epidemiologist at WBVR, explains: “Several mallards came to visit the range between sunset and sunrise daily. They look for food and swim in puddles of water that are formed during the winter period by abundant rainfall in the range.

“While swimming in the puddles, the ducks may defecate. During the day, the chickens drink the same water, as we saw in the video camera images. In the cold winter period, the bird flu virus can survive in such water for a long time.”

In winter 2019 – 2020, WBVR worked in collaboration with the university to investigate whether a laser bird deterrent system could be used to keep wild birds away from domestic animals, therefore reducing the spread of avian influenza.

The system, developed by Bird Control Group, works by projecting a green laser across areas where wild birds aggregate. The birds see the laser as a physical threat and flee the area.

For the study, the laser bird deterrent system was set up on a six metre high pole in the farm's 1.5 hectare free-range area. It was activated between 5.00pm, and 10.00am every day for one month. Eight video cameras where also installed in the area to record wild bird visits.

The results showed that, when the laser was in use, a 99.7 per cent wild duck reduction rate was recorded. There was also a reduction in visits from other wild birds in the free-range area during sunrise and 10 am.

Dr Elbers concluded: “In this study, we confirm the high efficacy of using lasers to reduce the daily number of wild bird visits to the free-range area of a layer farm situated in an AIV-hotspot area.

“Given this high efficacy, the application of these lasers becomes a viable alternative for the prevention of introduction of avian influenza infections in poultry.”