Cookie use on MRCVSonline
We use cookies to ensure that we give you the best experience on our website. If you continue without changing your settings, we will assume that you are happy to receive all cookies.
Accept Policy
Change cookie settings
University of York study investigates impact of pets on mental health during lockdown 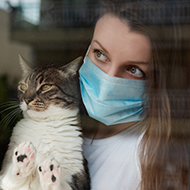 "I worry for their health and wellbeing during these times, with the concern over financial difficulties if work becomes scarcer." - Survey respondent.

Responsibilities of ownership lead to stress despite emotional support from pets.

While animal ownership has helped the mental wellbeing of thousands of people during the COVID-19 pandemic, new research shows that it has also led to stress and worry around providing adequate care for pets, and in some cases these challenges may have outweighed the benefits of pet ownership.

The study, conducted by the University of York, investigated the role of companion animals as sources of emotional and physical support during the first lockdown phase.

Some 6,000 participants took part in the survey, answering questions relating to mental health, wellbeing, loneliness and animal companionship in the first lockdown.

The survey also invited free-text responses, asking participants to describe their own experiences of animal ownership during lockdown.

Many people reported that their pets had constituted a reliable source of support during lockdown, helping to reduce anxiety and stress during this time while also encouraging owners to exercise and maintain structure in their day.

There was also a general sense that wildlife provided a positive distraction from stress and worry for many people during this time.

Owners did express concerns around animal ownership during the pandemic, including frequent worries around the possibility of animals carrying COVID-19, access to veterinary care, caring for their animals, and worries about their pet experiencing separation anxiety when they returned to work.

Financial uncertainty also led to stress around animal ownership, as many owners expressed concerns over not being able to afford pet food, healthcare and other necessities during these times.

According to the University of York it was apparent that these concerns often exacerbated stress in participants as a result of the responsibilities and potential additional financial cost of animal ownership.

Dr Elena Ratschen from the Department of Health Sciences said: “The findings complement and extend previous insights into the impact of human–animal interaction with both companion and non-companion animals”.