Cookie use on MRCVSonline
We use cookies to ensure that we give you the best experience on our website. If you continue without changing your settings, we will assume that you are happy to receive all cookies.
Accept Policy
Change cookie settings
New contender for 'world's smallest reptile' found in Madagascar 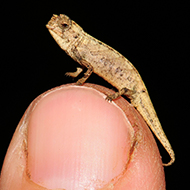 Scientists have discovered a new subspecies of chameleon that they believe could be the smallest reptile in the world.

With a body size of just 13.5mm, the brookesia nana – or 'nano chameleon' – was found by a joint team of German and Malagasy scientists on an expedition in the North of Madagascar.

Their study was recently published in the open access journal Scientific Reports.

The team was only able to find two individuals, a male and a female. Measuring 22mm from top to tail, the male is the smallest known male of the roughly 11,500 known non-avian reptiles, according to the Bavarian State collection of Zoology in Munich.

The female is larger at 19mm body length and 29mm total length.

Dr Mark D Scherz, one of the researchers involved in the discovery, called it "a spectacular case of extreme miniaturisation.”

Dr Scherz added that, as the miniscule new chameleon lives in the mountains of mainland Madagascar, it “violates the pattern of the smallest species being found on small islands. That suggests that something else is allowing/causing these chameleons to miniaturise.”

Despite only two individuals being located the researchers expect that that brookesia nana has a very limited distribution range, similar to most species of dwarf chameleons.

“Unfortunately, the habitat of the nano chameleon is under heavy pressure from deforestation,” said Oliver Hawlitschek from the Center of Natural History in Hamburg, “but the area has recently been designated as a protected area, and hopefully that will enable this tiny new chameleon to survive.”