Cookie use on MRCVSonline
We use cookies to ensure that we give you the best experience on our website. If you continue without changing your settings, we will assume that you are happy to receive all cookies.
Accept Policy
Change cookie settings
Health warning about rising obese pet trend on TikTok 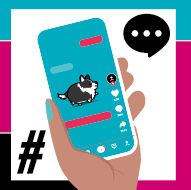 The term 'chonky' is a commonly used term on social media which implies that overweight dogs are cute and funny.

Research by the homemade dog food platform VetChef has revealed that videos celebrating overweight dogs have been viewed more than 90 million times on the social media platform TikTok.

The study also highlighted how this trend of glorifying overweight pets was prevalent across all major social media platforms. It found that there are one million members or followers of groups centred around overweight dogs on Facebook, Instagram and Reddit alone.

On TikTok the hashtag #fatdog has 72.3 million views, while #chubbyboy has 10 million and #fatdogs has 4.4 million.

The breeds that feature most prominently as part of this trend are pitbulls, French bull dogs, pugs, terriers and beagles. Many of the commonly featured breeds already have hereditary health problems which are likely to be exacerbated by being overweight.

VetChef founder Dr Joe Inglis, who is also well-known for his appearances on Blue Peter, The Wright Stuff and Daybreak, comments: “While it is always a delight to see the joy pets bring, it is worrying that the trend of normalising and glorifying pets that are actually clinically overweight is on the rise.

“The unfortunate reality is that overweight pets are likely to have a lower quality of life, as they are more likely to develop serious health conditions such as diabetes, osteoarthritis and cancer.”

Dr Inglis urged pet owners to be responsible in monitoring and managing their dog's weight; feeding them a healthy diet and ensuring they receive adequate daily exercise.

“We’re now calling on all pet owners to avoid celebrating their overweight animals - and instead celebrate them looking fit and healthy.” He concluded.