Cookie use on MRCVSonline
We use cookies to ensure that we give you the best experience on our website. If you continue without changing your settings, we will assume that you are happy to receive all cookies.
Accept Policy
Change cookie settings
Fossils’ soft tissues helping scientists to unravel origins of early animals 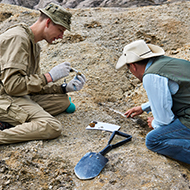 Scientists unearthed the fossil of an animal known as namacalathus. The soft tissue of which had been remarkably preserved by pyrite.

Researchers from the University of Edinburgh are using newly-discovered, well-preserved fossils to trace the ancestry of some of the Earth's earliest animals.

The Cambrian event is notable as the period when practically all major modern-day animal groups started appearing in the fossil record. But, until recently, the origins of animals that evolved during the Cambrian event were mostly unknown because of a lack of well-preserved fossil evidence.

The new study – published in Science Advances – has uncovered the first known link between animals that evolved some 540 million years ago during the Cambrian Explosion and one of their early ancestors.

Edinburgh scientists unearthed the fossilised remains of miniscule animals known as namacalathus – which resemble a pin cushion attached to a short stalk –  while conducting fieldwork in Namibia.

Until now, only skeletal remains of namacalathus had been found. But, using x-ray imaging, the team found soft tissues inside the fossils which had been perfectly preserved by a metallic mineral called pyrite.

Through analysing and comparing these soft tissues to those in animals that evolved later, the team found that namacalathus was an early ancestor of species that appeared during the Cambrian Explosion, including types of prehistoric worms and molluscs.

Professor Rachel Wood, from the University of Edinburgh’s School of GeoSciences, said: “These are exceptional fossils, which give us a glimpse into the biological affinity of some of the oldest animals.

“They help us trace the roots of the Cambrian Explosion and the origin of modern animal groups. Such preservation opens up many new avenues of research into the history of life which was previously not possible.”