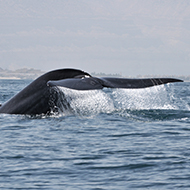 The population likely spends most of it's time in the northwestern Indian Ocean, in the Arabian Sea and to the west of the Chagos.

A team of researchers has found a previously unknown population of blue whales living in the Indian Ocean, after identifying an unrecognised whale song in the area.

Although blue whales are difficult to find, every population has it's own unique song, which is hugely helpful to researchers. This new song was first detected in 2017 in the Mozambique Channel off Madagascar by Dr Salvatore Cerchio, the director of the African Aquatic Conservation Fund's Cetacean Programme.

Dr Cerchio was also working with a team of scientists collecting acoustic recordings off the coast of Oman in the Arabian Sea, who also picked up the unique song.

“It was quite remarkable,” he said, “to find a whale song in your data that was completely unique, never before reported, and recognize it as a blue whale.

“With all that work on blue whale songs, to think there was a population out there that no one knew about until 2017, well, it kind of blows your mind.”

After reporting their findings to the Scientific Committee of the International Whaling Commission (IWC) in 2018, the team was contacted by Emmanuelle Leroy from the University of New South Wales, Australia, who recognised that his team had recorded the same song off the Chagos Archipelago in the central Indian Ocean.

As the collaborative team grew and analysed their shared data, they concluded that this new population likely spends most of it's time in the northwestern Indian Ocean, in the Arabian Sea and to the west of the Chagos.

The importance of this new discovering is heightened by the fact that some researchers consider both the northern Indian Ocean blue whales and Arabian Sea humpback whales to comprise unique subspecies, not simply populations, making them particularly important to biodiversity.

A published paper about the new population can be found in the journal Endangered Species Research.