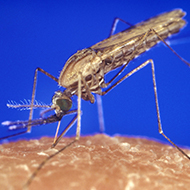 Only the female mosquito bites people and animals to feed on blood and spread disease.

'Femaleless' gene can be manipulated to prevent female mosquitoes from developing.

Scientists at The Pirbright Institute have discovered a new gene that determines the sex of malaria mosquitoes.

Only the female mosquito bites people and animals to feed on blood and spread disease. Researchers say the new gene, named femaleless, can be manipulated to prevent female mosquitoes from developing - and could therefore provide a new means for the genetic control of mosquito populations.

The study was led by scientists from the Vector Molecular Biology Group and published in Current Biology.

In the study, researchers first identified femaleless in the mosquito Anopheles gambiae, a primary malaria carrier in Africa. Their experiments revealed that by decreasing the gene expression in mosquito eggs, females develop a more male-like appearance and cannot mate or feed on blood.

The scientists also discovered that femaleless is exclusive to mosquito species belonging to the genus Anopheles, which is solely responsible for transmitting human malaria. The gene was detected in all Anopheles species studied, and its genetic sequence proved to be similar in different species.

Dr Jaroslaw Krzywinski, head of the Vector Molecular Biology Group at Pirbright, explains: “We first investigated femaleless because we suspected it would have a role in sex determination, but it was unexpected that knockdown of the gene’s expression would lead to female lethality.

“This gene is highly conserved in sequence and function in various Anopheles species and, as such, provides an excellent universal target to eliminate females of major malaria vector species, enabling the control of their populations. We hope that this discovery could help us to tackle one of the most devastating insect-borne diseases in the world.”

According to the World Health Organisation, there were an estimated 229 million clinical cases of malaria in 2019 and more than 400,000 deaths globally. Children under five are the most vulnerable group affected by the disease, accounting for 67 per cent of all malaria deaths in 2019.