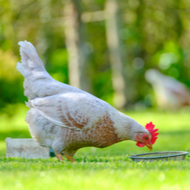 Dozens of hens and cockerels have been abandoned in recent weeks, sparking fears that charities and rescue centres will soon be overrun with unwanted chickens.

Many people went out and purchased chickens at the start of the coronavirus lockdown, in part over concerns about egg shortages, but also because people were spending more time at home.

An RSPCA spokesperson said: “Concerns were raised during lockdown about the increase in pet acquisition and ownership, and we feared that people would soon lose interest and start to hand their animals over once life started to return to normal.

“In the spring, many hen producers reported huge surges in demand for chicks and we believe this may be because people panic bought birds due to shortages of eggs in the supermarkets but, due to the shops being better stocked, are now ‘surplus to requirement’. There are also concerns that some families may have taken on unsexed chicks, which have grown into noisy cockerels so are now being abandoned.”

In recent weeks, bird keepers have been required to keep their birds inside under new measures to tackle a highly pathogenic strain avian influenza (HPAI H5N8). But the RSPCA fears these new measures, which came into force on December 14, could fuel the surge in abandoned hens and put yet more pressure on rehoming centres.

Kate Parkes, poultry welfare specialist at the RSPCA, said: “It’s really important that owners follow Government biosecurity advice to help protect the health of their birds as well as to try and limit the spread of the virus.

"All pet poultry owners need to stay vigilant for signs of disease and ill-health in their flocks, and it’s vital they seek veterinary advice if they have any concerns for their birds. We’re concerned that worries about bird flu and changes to how we’re allowed to keep hens may lead to more owners abandoning their pets, putting more pressure on rescue centres.”