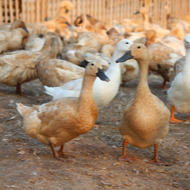 A case of HPAI H5N8 avian influenza has been confirmed in rearing ducks at a premises in Norfolk.

On 28 December, the Animal and Plant Health Agency (APHA), confirmed the disease in rearing ducks at a premises in Norfolk.

All birds on the infected site near Watton, Breckland, have been humanely culled. 'A 3.4km Protection Zone and 10.4km Surveillance Zone has been declared around the premises', the APHA said.

On 26 December, H5N8 was confirmed at a captive bird, non-poultry, premises near Attleborough, Breckland, Norfolk.

'Further testing confirmed this to be the highly pathogenic strain,' the APHA said. 'All birds on the infected premises have been humanely culled and a 3km Protection Zone and 10km Temporary Control Surveillance Zone have been declared around the premises'.

Since 14 December, it has been a legal requirement for all bird keepers to keep their birds indoors.

A joint statement from the UK's three Chief Veterinary Officers read: “Whether you keep just a few birds or thousands, from 14 December onwards you will be legally required to keep your birds indoors or take appropriate steps to keep them separate from wild birds. We have not taken this decision lightly, but it is the best way to protect your birds from this highly infectious disease.”

For more information on avian influenza, including the latest guidance, visit GOV.UK