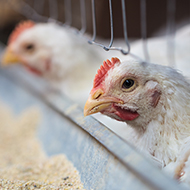 A 10km temporary control zone has been placed around the infected premises.

Highly pathogenic avian influenza (H5N8) has been confirmed in a flock of birds on the island of Sanday in Orkney, Scotland.

A 10km temporary control zone has been placed around the infected premises to limit the risk of the disease spreading. This zone includes restrictions on the movement of poultry, carcasses, eggs, used poultry litter and manure and restrictions on bird gatherings.

The remaining birds at the premises have been humanely culled. Producers and bird keepers are being reminded to comply with the new housing measures which came into effect on 14 December and follow biosecurity procedures.

Scotland’s rural affairs minister, Mairi Gougeon, said: “We have declared a Prevention Zone as a precautionary measure to protect Scotland’s poultry industry. I urge all bird keepers to maintain and strengthen their farm biosecurity measures in order to help prevent an outbreak of avian influenza in Scotland.

“The Scottish Government and its partners continue to monitor the situation in England and Europe closely and stand ready to respond to any suspicion of disease in Scotland. Any bird keepers who have concerns should immediately seek veterinary advice.”

Scotland’s chief veterinary officer, Sheila Voas, said: “This case of H5N8 in a flock of birds on Sanday confirms that Avian Influenza is present in Scotland.

“We have already made clear that all bird keepers – whether major businesses or small keepers with just a few birds – must ensure that their biosecurity is up to scratch to protect their birds from disease and prevent any contact between their birds and wild birds.

“Keepers who are concerned about the health or welfare of their flock should seek veterinary advice immediately. Your private vet, or your local Animal and Plant Health Agency office, will also be able to provide practical advice on keeping your birds safe from infection.”

She continued: “Any dead wild swans, geese, ducks or gulls, falcons or other birds of prey or five or more dead wild birds of other species in the same location, should be reported to the Defra dead wild bird helpline.

“Public health advice is that the risk to human health from the virus is very low and food standards bodies advise that avian influenzas pose a very low food safety risk for UK consumers, and it does not affect the consumption of poultry products including eggs.”

In November, the UK's chief veterinary officers declared an Avian Influenza Prevention Zone (AIPZ) across Britain, under which keepers with 500 birds or more must restrict access for non-essential people on their sites, change their clothing and footwear before entering enclosures, and clean and disinfect site vehicles daily.

Weeks later, new measures came into force requiring all bird keepers in England, Scotland and Wales to keep their birds indoors and follow strict biosecurity measures to prevent transmission of the disease.The risk of incursion of avian influenza in the UK is currently 'very high' for wild birds, 'medium' for poultry with high biosecurity, and 'high' for poultry with poor biosecurity.

Eight cases of highly pathogenic H5N8 avian influenza have so far been confirmed in poultry in England. The most recent case was confirmed at a premises near Willington, South Derbyshire.