MRCVSonline cannot control these cookies from outside sources and we advise you to check with the relevant third party for more information..
Vets welcome proposed ban on primates as pets 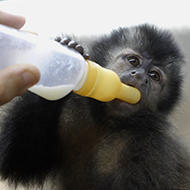 An estimated 5,000 primates are kept as pets in the UK.

The BVA has welcomed government proposals to ban the keeping of primates as pets in England.

On Saturday (12 December), the Department for Environment, Food and Rural Affairs (Defra) launched an eight-week consultation seeking views on whether to bring forward legislation to ban the keeping of primates as pets in England.

Under the proposals, it would be an offence to keep primates, such as lemurs, capuchins and squirrel monkeys as pets. Permission would be granted to those licenced to keep primates at zoo level standards.

Welcoming the move, BVA senior vice president, Daniella Dos Santos said: “For a long time, we have called for a ban on private individuals keeping primates as pets. As​ ​vets,​ ​we​ ​have​ ​significant​ ​concerns​ ​as​ ​to whether​ ​the health and​ ​welfare​ ​needs​ ​of​ ​primates​ ​can​ ​ever​ ​be​ ​met​ ​under these circumstances.

“​Primates​ ​are​ ​long-lived, intelligent​ ​and​ ​socially​ ​complex​ ​animals​ ​whose​ ​needs​ ​are​ ​extraordinarily​ ​difficult​ ​to​ ​meet​ ​in​ ​captivity and we can think of no circumstances where a primate would benefit from being kept in this way.”​

She added: “We welcome the Government’s move to open a public consultation on this and hope that it does indeed result in a ban. If​ ​the​ ​UK wants​ ​to​ ​maintain​ ​its​ ​reputation​ ​for​ ​some​ ​of​ ​the​ ​highest​ ​standards​ ​of​ ​animal​ ​welfare in the world​ and if the government wants to fulfil its promises of enhancing the welfare of animals as we leave Europe then we​ ​must​ ​put an end to ​the​ ​keeping​ ​and trade of​ ​primates​ ​as​ ​pets.”

In October 2019, Defra launched a Call for Evidence seeking evidence about the number of primates kept as pets and their welfare, how they are acquired and how any new restrictions might apply.

According to the RSPCA, an estimated 5,000 primates are kept as pets across the UK. Dr Ros Clubb, senior scientific manager at the charity described the proposed ban on pet primates as 'a fantastic Christmas present'.

“We are delighted that a ban on keeping primates as pets is now in sight - it’s a fantastic Christmas present. We look forward to reading the government's proposals in detail and hope that the legislation will deliver an end to the keeping and trade of primates as pets,” he said.

“Primates are intelligent, sentient and highly social animals with complex needs that simply cannot be met in a domestic environment.”