MRCVSonline cannot control these cookies from outside sources and we advise you to check with the relevant third party for more information..
Mars Comedy Pet Photographer of the year revealed 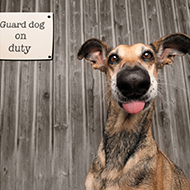 'Guard dog on duty' - rescue dog Noodles was a clear favourite with the judges.

The winner of the 2020 Mars Petcare Comedy Pet Photographer of the Year Award has been revealed.

Elke Vogelsang scooped first prize for her photo of rescue dog Noodles, a Galgo Espanol mix breed. With his goofy expression, Noodles was a clear favourite with the judges and also won the Dog category award.

On hearing the news, Elke Vogelsang said: “It's wonderful to be associated with something that makes people happy. This dog definitely is a mood-lifter. Happy to share her funny, gorgeous face with the world.”

Elke discovered Noodles in a kill shelter in Spain, abandoned at the end of the hunting season. Determined to rescue her, Elke said that she ‘fell in love with her gorgeous face and funny ears immediately.’

The Mars Petcare Comedy Pet Photo Awards aims to showcase the incredibly positive impact that pets have on our lives and raise awareness around homeless pets in the UK. Pet and animal lovers were encouraged to submit funny images of their pets for a chance of winning £3,000 and to raise money for the Blue Cross Pet Charity.

Elke said that she intends to reinvest some of the prize money back into an organisation for pet rescue. Other winners include:

Tom Sullam from the Comedy Pet Photo Awards, adds: “I think it’s fair to say that most people can’t see the end of 2020 fast enough! 2021 will hopefully bring some good news, some cheer and positive horizons for everyone - but in all the gloom of 2020, the Comedy Pet Awards managed to raise our spirits more than most things.

“The importance of pets in our lives - the positive life-affirming friendship that they bring without even realising it - is often underestimated and taken for granted. But this year has really given these pets a chance to shine and I think without pets many, many people would have had a harder time dealing with the isolation. Thank you to the pets, all of them, for making us smile through this competition, and keeping many of us on an even keel!”