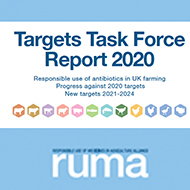 RUMA's Targets Task Force Report 2020 sets out targets for the aquaculture, pigs, poultry and ruminant sectors for the next four years.

Goals include the establishment of a UK-wide network of 'Farm Vet Champions'.

New targets for the responsible use of antibiotics in UK farm animals over the next four years have been announced by the Responsible Use of Medicines in Agriculture (RUMA) Alliance.

Among the targets for 2024 include the collection of data into the new AHDB Medicine Hub - a UK centralised database for ruminants. RUMA chair Cat McLaughlin said the move reflects that data gathering in the large and diverse cattle and sheep sector is 'still lacking'.

There will also be a focus on disease prevention and herd and flock health planning, with plans to develop a UK-wide network of ‘Farm Vet Champions’ to set, meet and record personal and practice-level specific medicine prescribing goals.

Welcoming the targets, BVA president James Russell said: “A large part of this next phase will be driven by a focus on disease prevention strategies, such as improving uptake in vaccines. Better data gathering and ongoing improvements in veterinary-led health planning on farms will also help to further lower antibiotic use by reducing the incidence of endemic diseases.

“We are pleased to see that initiatives to train vets as antibiotic stewards and to impart medicines best practice training for veterinary and agriculture students feature prominently in the ambitious new targets. Each of our species-specific veterinary divisions must be lauded for their work in developing and supporting this training.”

The new targets build on the success of 40 sector-specific targets released in 2017. According to the latest UK-VARSS 2019 report, these targets have seen UK sales of antibiotics for food-producing animals halve in the past five years.

The UK VARRS report also shows that the UK is now the fifth-lowest user of antibiotics for food-producing animals in Europe and the lowest among more commercially productive European countries.

RUMA chair Cat McLaughlin, said: “The UK farming industry has responded extremely well to the targets. Our original aim of lowering overall antibiotic use, and in particular highest-priority critically important antibiotics (HP-CIAs), has been categorically achieved in the face of some challenging external conditions.

“Most sectors are now capturing data on antibiotic use across 90 per cent or more of their sector, which has been a key part of the success.”

Professor Peter Borriello, chief executive of the VMD, commented: “The ambition now outlined in this report, alongside the proactive, holistic approaches and focus on behaviour change principles gives me every confidence that they will once again succeed.

“We look forward to working with the sectors as we continue on this endeavour, which will ultimately be of benefit to the reputation of the UK livestock sectors as well as helping to protect human and animal health.”