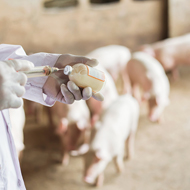 There has been an overall fall in the level of resistance in E. coli from healthy pigs at slaughter since 2015.

“This demonstrates how farmers and vets have been working together to use antibiotics responsibly” - Peter Borriello, VMD.

UK antibiotic sales for food-producing animals have fallen by as much as half since 2014, according to the latest UK-Veterinary Antibiotic Resistance and Sales Surveillance (UK-VARSS) annual report.

Published by the Veterinary Medicines Directorate (VMD), the 2019 report shows that sales of antibiotics increased slightly by 1.5 mg/kg to 31.0 mg/kg compared to 2018. This increase was, however, offset by a reduction in the use of the Highest Priority Critically Important Antibiotics (HP-CIAs), which are critical for human health.

The report, released at the start of World Antimicrobial Awareness Week (18-24 Novermber), also shows that the use of veterinary antibiotics in 2019 was at its second-lowest level since the start of reporting, and the UK has the fifth-lowest level of antibiotic sales in Europe.

Peter Borriello, chief executive of the VMD said: “In the last five years we have worked closely with the farming industry and veterinary profession to achieve huge reductions in the use of antibiotics in animals.

"This demonstrates how farmers and vets have been working together to use antibiotics responsibly while safeguarding the health and welfare of our livestock.

“The UK Government will continue to work with industry to focus on infection control, reducing the need to use antibiotics to treat disease and maintain the UK’s world-leading standards in animal welfare.”

Reducing the use of unnecessary antibiotics in animals, especially HP-CIAs, is key to halting the spread of antibiotic resistance and protecting the most important antibiotics for human health. However, their use in livestock remains critical to protect against disease.

The report shows that between 2018 and 2019, the use of HP-CIAs in food-producing animals fell by 21 per cent, accounting for 0.5 per cent of total antibiotic sales. Figures show there was also an overall fall in the level of resistance in E. coli from healthy pigs at slaughter since 2015, and resistance to HP-CIAs in E. coli is at very low levels.

Christine Middlemiss, chief veterinary officer for the UK, added: “I am delighted that the UK continues to lead the way as one of the lowest users of antibiotics in livestock across Europe.

“These findings are testament to the hard work of the UK’s farmers and vets to use antibiotics responsibly in order to tackle antibiotic resistance and protect our most critically important antibiotics in human health, while also reducing the burden of disease in animals.”