Cookie use on MRCVSonline
We use cookies to ensure that we give you the best experience on our website. If you continue without changing your settings, we will assume that you are happy to receive all cookies.
Accept Policy
Change cookie settings
Vets save cocker spaniel after it eats a face mask 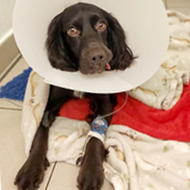 Ralph had always had a liking for socks, but owner Julie Veidman never thought he'd eat a face mask.

Veterinary staff at Huyton PDSA Pet Hospital had to perform emergency surgery on a one-year-old cocker spaniel named Ralph, after the animal ate a face mask.

Ralph's owner Julie Veidman woke one morning to find that her dog had vomited in the night. While not immediately concerned she became worried when Ralph could not keep water down and refused treats. She called PDSA straight away and was instructed to bring Ralph to the charity's pet hospital in Huyton.

“We examined Ralph and could feel something in his tummy – with his other symptoms we immediately suspected he’d eaten something he shouldn’t,” said veterinary surgeon Lizzie Whitton.

“An x-ray confirmed that there was some kind of blockage in his intestines. This can quickly become fatal, so we took him straight into emergency surgery.”

Ms Veidman, who is had to leave her job as a sales assistant due to the stresses caused by the pandemic, had an anxious wait at home while she awaited news.

“Walking away from the Pet Hospital holding his empty lead was one of the hardest things I’ve ever done,” she said. “He's been my absolute rock through lockdown, I don’t know what we [would do] without him.”

Ms Whitton continued: “Any type of surgery carries risk, and intestinal procedures can come with additional complications, but thankfully Ralph’s operation went very well. However we were all shocked when we removed a face mask from inside him!”

Ralph returned home soon afterwards and after two weeks he has made a complete recovery. Owner Julie thanked PDSA's veterinary team and added: “It worries me as you see masks discarded all over the place right now, and Ralph is living proof that dogs might eat them and suffer serious consequences.”