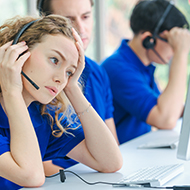 Fewer than half of veterinary receptionists are satisfied with their relationship with their practice manager.

Fewer than half of veterinary receptionists are satisfied with their relationship with their practice manager, according to a new survey, which also reveals high levels of dissatisfaction with salary levels.

The survey, based on responses from 812 veterinary receptionists, provides an insight into inter-practice relationships at a time when the profession has been facing significant challenges as a result of the coronavirus pandemic.

Conducted during August and September 2020 by the British Veterinary Receptionists Association (BVRA), the survey found that just 46 per cent of participants are satisfied with their relationship with their practice manager.

Only a quarter (26%) of respondents from corporate groups said they were satisfied with their working relationship with head office. Relationships were further strained during the COVID-19 pandemic, with 71 per cent of those furloughed saying communication with their practice manager had been average or poor.

Veterinary Management Group (VMG) president Rich Casey said: “This report is sobering reading as it concerns the careers and wellbeing of a group of people who are essential to the success of any veterinary practice. The VMG is particularly interested in this research as a significant proportion of our members are practice managers and likely to be line managers of the reception team."

Sixty-four per cent of respondents to the survey felt they were not being paid a fair wage for the responsibilities they carry, including ensuring practice protocols, handling veterinary medicines, and promoting healthcare plans.

Discontent with salary levels was exacerbated during the COVID-19 pandemic. Half of respondents (49%) were furloughed and 91 per cent of these said they received no top-up pay from their practice in addition to the government’s 80 per cent contribution.

The survey also revealed a lack of access to CPD. Around 56 per cent of respondents wanted to update and increase their knowledge, but the same percentage claimed a lack of time was a barrier.

In light of these findings, the VMG and the BRVA have teamed up to host a free webinar to discuss the issues raised by the survey and potential solutions. The webinar, entitled Tackling Receptionist Morale Together, will take place from 2.00 pm-4.00 pm on Wednesday 25 November.

BVRA founder Brian Faulkner commented: “BVRA is always working to improve the recognition, respect and job satisfaction of its members. “We are delighted to team up with VMG as another way of doing this, alongside developing the status of a Registered Veterinary Receptionist.”