MRCVSonline cannot control these cookies from outside sources and we advise you to check with the relevant third party for more information..
Goby fish fins may be as sensitive as human fingertips, study suggests 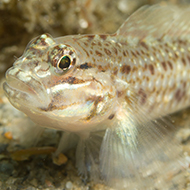 The team studied goby fish from Lake Michigan as they manouvered over different surfaces.

Researchers observe how goby fish use their fins to interact with different surfaces.

A new study by the University of Chicago has found that goby fish fins might be as sensitive to touch as human fingertips.

The findings, published in the Journal of Experimental Biology, suggest that human ability to detect differences between surfaces and shapes likely evolved in a distant common ancestor.

In the study, researchers set out to see if bottom-dwelling goby fish could feel different surfaces with their fins.

The team collected goby fish from Lake Michigan and filmed them in a tank as they manoeuvred over different surfaces, such as a piece of slate or plastic. They noted how the fish’s fins splayed out over each surface, similar to how a human might place their hand on a surface.

Researchers then set out to see if the fish could differentiate between fine variations, such as that of different grades of gravel. They designed a rotating wheel with ridges spaced along the edges and studied the nerve signals that the touch produced.

Study author Adam Hardy said that the nerve responses matched the pattern of the ridges, suggesting that gobies could be as sensitive to detecting coarse surface textures as the finger pads on primate.

“Primates are often held up as the gold standard in tactile sensitivity, so it was really exciting to see that fish fins exhibit a similar tactile response," he said.

He added that the gobies’ tactical sensitivity could have originated far back in evolution.

“This primate hand-like touch also suggests that the ability to detect surface differences via touch has been around a lot longer than we previously thought,” he said.