Cookie use on MRCVSonline
We use cookies to ensure that we give you the best experience on our website. If you continue without changing your settings, we will assume that you are happy to receive all cookies.
Accept Policy
Change cookie settings
New code of practice for animal sanctuaries in Wales 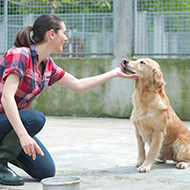 The welsh government has published a voluntary code of practice for owners of Animal Welfare Establishments (AWE), which contains guidance on a range of issues including animal care, staff management and rehoming policies.

Approximately 90 animal sanctuaries are currently operating in Wales, but there are no specific rules in place to ensure these establishments run safely and effectively. This new code of practice outlines the steps that need to be taken to meet the standard of care which the law requires.

The guidance was published by the Animal Welfare Network for Wales (AWNW) – an independent initiative made up of a coalition of organisations including the RSPCA, which chaired a specialist working group to develop the code.

In a statement, the charity welcomed the new guidance, and praised the incredible work that sanctuaries do. However, the group explained that a lack of oversight, scrutiny and regulation could lead to welfare issues if establishments became ‘overburdened’.

David Bowles, RSPCA head of public affairs, said: "Many animal welfare sanctuaries do incredible work for animals - but there's a real risk that many in this sector become quickly overburdened and stretched by a lack of resources, support and planning.

"Anyone can call themselves a sanctuary in Wales - and clearly that needs to change; as these are institutions many people in Wales trust and assume will be subject to rigorous checks and oversights.

"Positively, the Welsh Government's publication of this voluntary code is a huge leap forward - and acknowledges that sanctuary owners should be following important animal welfare and business guidelines to ensure their operations are sustainable and protect animals in their care.”