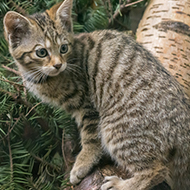 Viewing areas were reopened this week to allowed visitors to get a closer look at the kittens.

Litter of four could be ‘potential lifeline for the species’

The Royal Zoological Society of Scotland (RZSS) has announced the birth of four wildcat kittens at Highland Wildlife Park, near Aviemore.

In a statement announcing the birth of the kittens, animal collection manager at Highland Wildlife Park Keith Gilchrist said: “We are thrilled to welcome the birth of four kittens, who were born during lockdown in May, to mum Fiain and dad Blair.

“It has been great watching them grow and it is fantastic to now be able to welcome visitors to meet them too.”

Wildcat viewing areas were reopened this week to allow visitors to get a better look at the new litter. Guests are being encouraged to wear a facemask in these areas to keep other guests and the animals safe.

The new kittens, named Strom, Eilein, Druim and Vaara were born as part of RZSS’s Saving Wildcats project, which aims to preserve this rare and threatened species by breeding and releasing wildcats into the wild.

Ex-situ conservation manager of Saving Wildcats David Barclay said: “Following a sad history of habitat loss, persecution and, more recently, breeding with domestic cats, wildcats are on the brink of extinction in Scotland, but it’s not too late.

“By bringing together the expertise and skills of national and international organisations, the Saving Wildcats project can secure a future for the Highland tiger by breeding and releasing wildcats into the wild, so every birth is a potential lifeline for the species.”

The Saving Wildcats project is being carried out in collaboration with groups such as NatureScot, Forestry and Land Scotland (FLS) and The Cairngorms National Park Authority (CNPA).