Cookie use on MRCVSonline
We use cookies to ensure that we give you the best experience on our website. If you continue without changing your settings, we will assume that you are happy to receive all cookies.
Accept Policy
Change cookie settings
Blue Cross to star in new national TV series 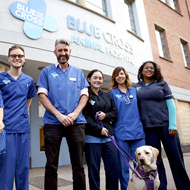 Inside Animal A & E will follow the teams of Blue Cross veterinary surgeons, nurses and volunteers in London, Victoria and Grimsby.

Programme will place animal hospital teams under the spotlight

A new television series which will go behind the scenes at Blue Cross in Victoria, London and Grimsby is set to air next week.

Inside Animal A & E will be narrated by actress and animal lover Felicity Kendal. The programme will go behind the scenes of the charity’s animal hospitals, mobile clinic, and ambulance services, focusing on the care that Blue Cross provides for sick and injured animals.

Deputy nurse manager at Blue Cross in Grimsby Natalie Everett said: “We were thrilled to be involved in the making of these programmes and are very excited that the series is going to show our work to so many people tuning in every Monday. We are proud to show the behind-the-scenes work we do and hope it encourages more animal lovers to support us in the future.”

The first episode of Inside Animal A & E will air on Monday 7 September at 8pm and will see Sonia and Angela of the animal ambulance team as they pick up a 50kg Dogue De Bordeaux with a mysterious bedwetting problem. The episode will also follow volunteer Helen Leary in Grimsby, who is taking care of a tiny, orphaned kitten named Oliver.

Ms Leary said: “It was very exciting to have the film crew in the hospital following us while we got on with our work and I cannot wait to see the series and the finished programmes over the next few weeks. The team at Grimsby work incredibly hard and this will be wonderful for the clients and supporters to see for themselves.”