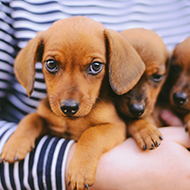 "With puppies in such high demand, and selling for such high prices, it’s creating a lucrative market for cruel puppy smugglers" - Paula Boyden, Dogs Trust.

Concerns have been raised about asking prices for some of the UK's most popular dog breeds and how they soared to record levels during the coronavirus lockdown.

Dogs Trust is urging potential puppy buyers to remain vigilant when buying via online adverts, to avoid being duped, and to never hand over a deposit before seeing the pup with and interacting with its mum.

The warning comes after an investigation by the charity revealed the that the asking price for five of the UK's most sought-after breeds - dachshunds, English bulldogs, French bulldogs, pugs and chow chows - skyrocketed between March at the start of lockdown and the end of June this year.

“It’s shocking to see how much dogs are being advertised for sale online and in particular how prices for some of the most popular smuggled breeds have increased during the coronavirus lockdown,” said Dogs Trust veterinary director, Paula Boyden. “While there are many responsible sellers out there, sadly there are plenty who are just looking to tug on the heartstrings and exploit the situation for their own profit.”

Dogs Trust looked at advertisements from the last three years on some of the UK’s largest classified advertising websites. It reports that prices for pugs, dachshunds and chow chows 'have never been higher', while English and French bulldogs have also seen significant increases.

Paula Boyden fears that the price hike is creating a 'perfect storm' for people to be 'dogfished' and scammed out of their hard-earned money.

“With puppies in such high demand, and selling for such high prices, it’s creating a lucrative market for cruel puppy smugglers and, sadly, we have rescued many dogs illegally imported into the country, destined to be sold during lockdown,” she said.

“That is why it is so important to always see a pup with and interacting with their mum and to go and see them more than once. Never pay a deposit without seeing the puppy in person first and check all paperwork carefully. If something doesn’t seem right, as hard as it may be, walk away and report the seller.”