MRCVSonline cannot control these cookies from outside sources and we advise you to check with the relevant third party for more information..
Study reports ante-mortem and post-mortem findings of rabbits with RHDV2 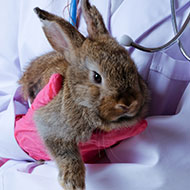 RHDV2 is currently spreading in areas of the world that were free from it until recently.

A new study reporting the clinical features of ante-mortem and post-mortem findings of rabbits with RHDV2 has been published in the Journal of Small Animal Practice (JSAP).

In the study, vets were encouraged to submit case histories and the results of post-mortem examinations of pet rabbits that had died suddenly. Samples taken during the post-mortem were sent for histopathological examination.

Study co-author Frances Harcourt-Brown, said: “Case histories, macroscopic findings and histopathology results were available from 300 rabbits that died suddenly. Of these, 185 (62%) died from RHD and showed characteristic histopathological features of RHD including apoptosis and variable lytic and coagulative hepatocellular necrosis, with the varying distribution.

"Interestingly, macroscopic evidence of disease was not present in all cases – for example, gross liver abnormalities were only reported in 30 per cent of cases, despite all cases showing hepatocellular necrosis on microscopic examination."

She added: “Rapid death and death of other rabbits in the household were common features of RHD. Histopathology was also useful in yielding valuable information about other causes of death in the rabbits that did not die from RHD.”

Nicola Di Girolamo, editor of JSAP concluded: “This is a terrible disease that is currently spreading in areas of the world that were free from it until recently. Having more evidence on the type of clinical presentations and lesions that should be expected with this disease in rabbit patients is going to be of tremendous value for clinicians.

“Given that there is not always macroscopic evidence of RHD, histopathology is key for the diagnosis of RHD in pet rabbits.”

The study, “RHDV2 epidemic in UK pet rabbits. Part 1: clinical features, gross post-mortem and histopathological findings” can be found in the July issue of the JSAP which is free for BSAVA members. It can also be read online at onlinelibrary.wiley.com