Cookie use on MRCVSonline
We use cookies to ensure that we give you the best experience on our website. If you continue without changing your settings, we will assume that you are happy to receive all cookies.
Accept Policy
Change cookie settings
Canine epilepsy study may help owners to predict seizures 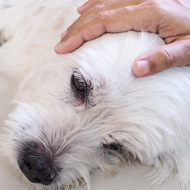 The study findings could give owners advance warning of seizures.

A Royal Veterinary College (RVC) study into canine epilepsy has revealed the various signs and changes in behaviours of dogs before a seizure.

Researchers say the findings could give owners advance warning of seizures, and enable them to identify the triggers that can be avoided to reduce the number of seizures their dog experiences.

Clinginess, excessive energy and unsettled sleep were some on the most commonly cited changes. These signs varied between different dogs, with other common observations including clumsiness, excessive panting, becoming withdrawn or quiet, and lacking energy.

More than half of the owners (60 per cent) said that could predict an upcoming seizure in their dog by using a combination of pre-seizure changes and recognising triggers. Nearly half of these owners were able to do so 30 minutes or more before the seizure commenced.

Researchers say their findings are incredibly important in helping owners identify ways to predict upcoming seizures and improve management when they do occur. The findings could also alleviate owner stress by increasing the predictability of seizures and leading to ways to stop them before they occur.

“It was fascinating to discover how in-tune many owners of dogs with epilepsy are with subtle changes in their dog’s behaviour before seizures,” commented Dr Rowena Packer, BBSRC Research Fellow and research lead in canine epilepsy at the RVC.

“Many of our findings echo what is seen in human epilepsy patients and add evidence to support the presence of prodromal pre-seizure periods in dogs as well as people.

She continued: “This study also highlights how crucial it is that owners of dogs with epilepsy keep good records, not just of their dog’s seizures, but also of changes in behaviour and exposure to potential triggers, to gain a better picture of patterns in their dog’s seizure activity.

"The RVC Pet Epilepsy Tracker app allows owners to keep records, that can also be shared electronically with their vet and with RVC for further research."