Cookie use on MRCVSonline
We use cookies to ensure that we give you the best experience on our website. If you continue without changing your settings, we will assume that you are happy to receive all cookies.
Accept Policy
Change cookie settings
Farm vets call on House of Lords to safeguard British food 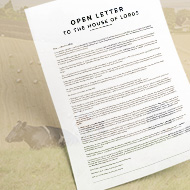 The open letter calls on the House of Lords to reject the Agriculture Bill and return it to the House of Commons.

The letter comes after a defeat to the Bill earlier this month, which would have protected farm animal welfare and food standards entering the UK as part of future trade deals.

'As the British Cattle Veterinary Association (BCVA), Sheep Veterinary Society (SVS) and Goat Veterinary Society (GVS) we are writing to you on behalf of our members and to stand alongside our farming colleagues and clients, in expressing our disappointment at the recent rejection of the Agriculture Bill amendments during the final Commons debate.

'Now that the Bill has passed to the House of Lords, after it cleared its third and final reading in the House of Commons, we are urging our learned peers and members to use your influence to scrutinise and reject the Bill in its current form. It is imperative that the UK maintains our high standards of production and guarantees that imports produced to a lower welfare standard never reach our supermarket shelves.

'The farming community is integral to the UK and without its existence many rural communities would cease to exist and would not be recoverable. The COVID-19 pandemic has emphatically highlighted the importance of food security and how UK production can rise to meet the most demanding challenges.'

The letter continues: 'British vets have worked alongside farmers, agricultural industry bodies, government, and food assurance schemes to consistently improve the welfare and health of animals farmed for their produce in this country. The Agriculture Bill presents a prime opportunity to ensure that the hard work and financial investment of the farming community is not in vain.

'We cannot allow food produced to standards which have been illegal in this country for decades to freely enter this country. Given the exit from the European Union, this opportunity is not only the best opportunity to support farming in this country, it may be the only one.'

To read the letter in full, visit bcva.org.uk.