Cookie use on MRCVSonline
We use cookies to ensure that we give you the best experience on our website. If you continue without changing your settings, we will assume that you are happy to receive all cookies.
Accept Policy
Change cookie settings
Lyme disease causes potentially treatable heart abnormalities in cats 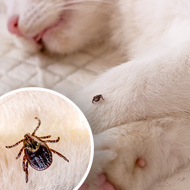 Lyme disease is extremely rare in cats and has never before been reported to affect their hearts.

Owners urged to maintain preventative anti-tick treatment in their animals.

Vets treating cats for heart abnormalities are being urged to consider whether they could have been brought about by Lyme disease.

The warning comes after researchers at the Royal (Dick) School of Veterinary Studies treated two cats with abnormally low heart rates caused by the tick-borne infection. Lyme disease is extrememly rare in cats and has never before been reported to affect their hearts.

Scientists found that the heart abnormalities could sometimes be resolved by treating the underlying Lyme disease. Their findings are reported in the Journal of Feline Medicine and Surgery Open Reports.

Camilla Tørnqvist-Johnsen from the School's Hospital for Small Animals, explains: “Lyme disease is exceedingly rare in cats and has never before been reported to affect their hearts, let alone been treated successfully. It is important that these cases are catalogued in the scientific literature for the benefit of future cats presenting similarly with low heart rate and abnormal rhythm.”

The study reports two separate cases of cats that had been referred to the School's Hospital for Small Animals with low heart rates and abnormal heart rhythm. Both cats had a blocked nerve impulse in the heart (third-degree atrioventricular block) which is the most common finding in humans where Lyme disease affects the heart. One of the cats had a tick-mark bite.

Extensive testing indicated that both cats had been infected with the bacteria that causes Lyme disease. Treatment was successful in one cat and completely resolved the heart disease. Unfortunately, the treatment was not successful in the other cat as the heart condition was more severe.

In light of their findings, researchers are calling on pet owners to maintain preventative anti-tick treatment in animals that go outside. They warn that an increasing climate could increase the prevalence of ticks and associated diseases in both cats and dogs.

Lyme disease in cats can be challenging to test for because the bacteria rarely stays in the blood for long, and antibodies generated to fight it may last for as little as a week, so more sensitive tests are needed, they note.