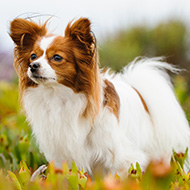 Von Willebrand disease type 1 has been observed in the papillon.

A new DNA testing scheme for Von Willebrand disease type 1 in the papillon has been announced by the Kennel Club.

The move follows consultation with the breed health coordinator, and is designed to combat inherited disease in the breed. Tested dogs will be recorded on the Kennel Club systems as either 'clear', 'carrier' or 'affected'.

Von Willebrand disease is an inherited bleeding disorder, characterised by bruising, bleeding from the nose or gums and prolonged clotting time. There are several variants associated with Von Willlebrand, but vWD1 is the most common and has been observed in the papillon.

A dog can inherit the disease if both its mother and father have the abnormal gene. A dog that only inherits one gene (either from its mother or father) is unlikely to show signs of the disease, but will be a carrier and could pass the condition on to any offspring.

'DNA test certificates should be emailed to health.results@thekennelclub.org.uk.'