Cookie use on MRCVSonline
We use cookies to ensure that we give you the best experience on our website. If you continue without changing your settings, we will assume that you are happy to receive all cookies.
Accept Policy
Change cookie settings
Call for vet practices to be included in COVID-19 support plans 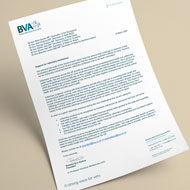 The letter has been sent to key government departments and counterparts in Wales, Scotland and Northern Ireland.

BVA urges for practices to be recognised as 'business critical'

The British Veterinary Association has written to the government calling for veterinary practices to be covered in the support plans for businesses affected by COVID-19.

In a letter sent to key government departments and counterparts in Wales, Scotland and Northern Ireland, the BVA urges for veterinary practices to be recognised as 'business critical' on account of the essential services they provide to protect animal welfare, public health and well-being.

It comes after chancellor Rishi Sunak unveiled a £350 billion package of measures, including rates of reliefs and grants, to support retail and hospitality businesses affected by COVID-19, and pledged to do 'whatever it takes' to keep these sectors afloat.

But the BVA says veterinary practices have so far not been included in the scope for this support, even though they will also be entering a period of significant financial difficulty - and continuing to provide vital care and treatment to animals while contending with staff shortages.

The BVA has also called for business rates reliefs to be extended to veterinary practices, most of which are SMEs. Under current plans, eligible businesses will receive 100 per cent rates relief for a year in England and 75 per cent in Scotland, with Wales and Northern Ireland expected to announce similar plans shortly.

The letter also stresses the importance of pets to the elderly and the vulnerable, and the important role they play in providing companionship.

Daniella Dos Santos, BVA President, said that while BVA welcomes the scale of this response, it is 'extremely concerned' that the measures don't extend to the veterinary profession.

“Veterinary practices are a mainstay in our communities providing a critical service to keep the UK’s pets healthy as well as supporting public health and well-being,” she said.

“With so many people self-isolating in the coming weeks and months, we can’t underestimate the important role that pets have to play in providing companionship and helping to boost their owners’ well-being. However, it is a sad fact that many practices may have no option but to close their doors for good if they aren’t eligible for the same support that’s rightly being rolled out to other businesses.”

She continued: “We are asking for an assurance from governments across the UK that veterinary practices will also be included in the scope for support and recognised as a business-critical service. Veterinary practices make such a valuable contribution to health and well-being at the heart of communities, so they need to be offered the same safety net that other businesses have been promised in the unpredictable times ahead.”