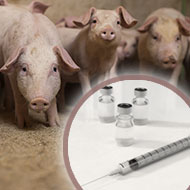 The vaccine was created by deleting a series of genes from the ASF virus.

Researchers from China’s Harbin Veterinary Institute have reported that an African Swine Fever (ASF) vaccine has been developed which has proved safe and effective under laboratory testing.

In a research paper published in Science China Life Sciences, the research team stated that the live vaccine was created by deleting a series of genes from the virus using the country’s first ASF strain as a backbone.

The researchers said: “We used the Chinese ASFV HLJ/18 as a backbone to generate six viruses bearing different gene deletions, and found that HLJ/18-7GD, which has seven genes deleted, is fully attenuated in pigs, has a low risk of converting to a virulent strain, and could induce solid protection in pigs against lethal ASFV challenge.

“HLJ/-18-7GD has been fully evaluated and proven to be safe and effective against ASFV. We therefore expect that this vaccine will play an important role in the control of ASFV.”

Safety evaluations showed that, after intramuscular injection, the HLJ/18-7GD virus did not appear in the blood or any other organs, and only remained in the lymph nodes of pigs for a short period. From this, researchers surmised that HLJ/18-7GD is “highly unlikely to convert to a virulent strain during its replication in pigs.”

Testing also found that the vaccine tested safely in pregnant sows and did not cause abortion when administered in the early, middle and late stages of pregnancy, nor limit the rate of piglets born.

Development of the vaccine was overseen by the Chinese Academy of Agricultural Sciences. At present, there has been no estimate given as to when it could be put into production.