Cookie use on MRCVSonline
We use cookies to ensure that we give you the best experience on our website. If you continue without changing your settings, we will assume that you are happy to receive all cookies.
Accept Policy
Change cookie settings
SRUC survey asks for farmers’ views on animal welfare 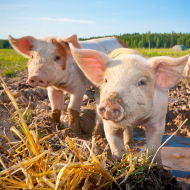 This study aims to help form a clearer picture of what farmers and the public feel is most important to animal wellbeing.

Researchers from Scotland’s Rural College (SRUC) have launched a survey in order to assess what both livestock farmers and members of the public think makes farm animals happy.

According to SRUC, it is generally believed by the public that farm animals are happiest when allow to roam freely and exhibit their natural behaviours, however livestock farmers often place greater emphasis on maintaining the health of the animals.

This new investigation from SRUC’s Animal Behaviour and Welfare team aims to clarify just how divided opinions are on what is most important for animal welfare.

After surveying 800 members of the public, the team is now asking farmers to provide their views on how important health and natural behaviours are for the wellbeing of farm animals.

The survey has been funded by the Scottish Government’s Rural and Environment Science and Analytical Services (RESAS), and is open to all livestock farmers across the UK and the Republic of Ireland.

Dr Belinda Vigors, a social scientist at SRUC, said: “We hope the findings will help us gain a better understanding of the value placed on different aspects of farm animal welfare and how potential trade-offs between animal health and natural behaviours are viewed by key stakeholders.

“Interest in this survey has already been expressed by those working in policy, so contributions from the livestock sector would be really valuable at this stage.”

To complete the survey, please visit the Happy and Healthy webpage. Results are due to be released by the end of the year.